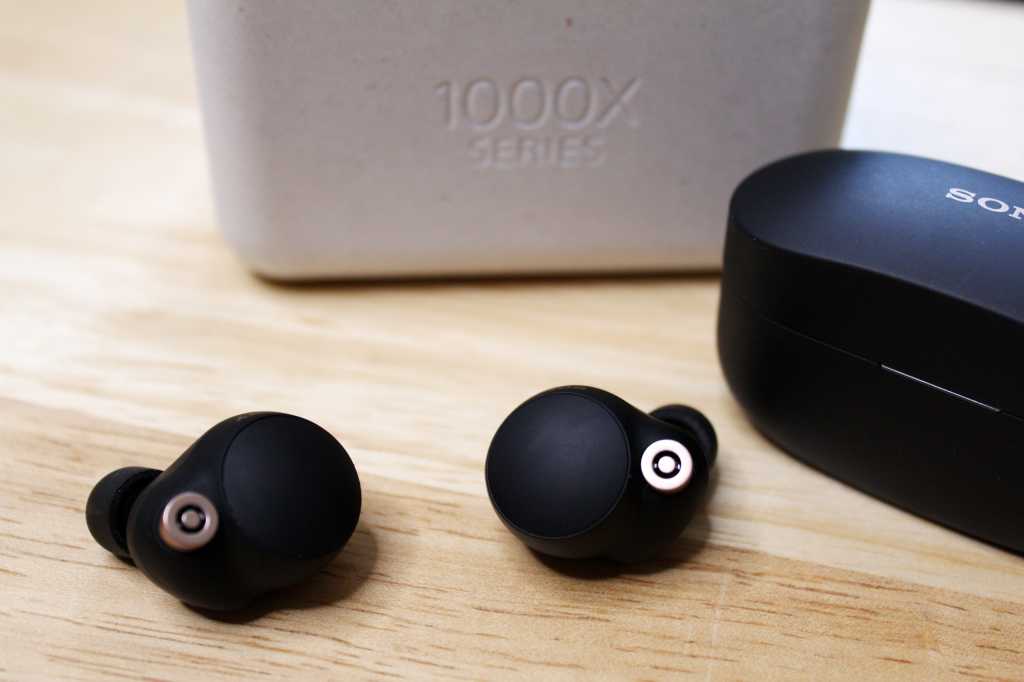 Alaina Yee / IDG
At a glance

The Sony WF-1000XM4’s improvements over the previous generation keep them a strong contender against popular rivals like the Bose QuietComfort Earbuds and Jabra 85t. With a slim, easily pocketable case, good battery life, and a pleasing default sound profile, most people looking for a portable set of true wireless earbuds with solid all-around performance won’t be disappointed.

Pre-pandemic, the number of true wireless earbuds with noise canceling was just a trickle. Now they are entering the market in a steady stream, and just in time. Even with reduced travel demand, in-ear headphones with active noise-canceling (ANC) still have their uses—blocking out background conversations in busy households, muffling the cacophony of loud streets, and the like.

With the predecessor WF-1000XM3, Sony pit a strong contender against Bose’s well-regarded noise-canceling competition. Now Sony’s successor ANC buds have improved across the board, making the WF-1000XM4 one of the top contenders in this space. That said, if you care deeply about sound profiles and noise-canceling strength, you should first make sure these buds have what you’re after.

The WF-1000XM4 has a rounded, button-shaped look, with tasteful metallic accents. No stems on these—which actually can make the fit a bit tricky. Though these buds are comfortably chunky, with enough surface area to easily grip them, seating them properly each time takes some guesswork. For a good seal, I had to place them at a certain angle and then twist them into place, but nailing the correct angle consistently was difficult. That struggle persisted even after dozens and dozens of listening sessions.

I ended up wearing these only in places where it was safe if one bud popped out of my ear. They went into my pocket in public bathrooms; a dunk in a toilet (besides being gross) would exceed the 1000XM4’s IPX4 rating, which protects against splashes. For normal workouts, the WF-1000XM4 held up fine and also wiped down easily.

When I finally managed to get them securely in my ears, the WF-1000XM4 felt comfortable. The tips come covered in a soft foam—very like Comply’s popular third-party tips—and should size well for larger ears. I’m often a Medium on other buds, but for the XM4, I went down to Small.

A couple of other thoughtful design touches help balance out the issues I had with getting a good seal. Sony labels the right and left buds in different colors, making it easy to figure out which is which at a glance. The left bud also has a tactile dot for sightless identification. Inserting and removing them from the case is straightforward, too, with little of the fumbling I’ve encountered with other models.

Once in the case, the WF-1000XM4 take up very little space, making them easy to carry. I like to travel light, and these shot up high on the list of items I’m willing to put in my jacket pocket. The weight doesn’t drag on the fabric either, and I get enough charges from the case to be out on a long hike without battery anxiety.

For music, the WF-1000XM4 are largely well-balanced, and many people will be satisfied by how these sound (and how detailed that audio is) out of the box. Some may find the default sound profile’s warmth a little too pervasive, though—it dampens the mids and highs, making them sound less crisp than other earbuds. The XM4’s companion app allows you to correct this somewhat by choosing a different sound profile from the nine presets, adjusting one of the presets in the manual mode, or creating a custom profile of your own. But like me, you may not be able to dial it in as precisely as you wish, since the sliders only move in a set of discrete ticks.

Subscribers to a handful of streaming services can take advantage of an additional feature called “3D Reality Audio,” which expands the earbuds’ soundstage and produces better directional audio. It’s a neat trick but very limited in scope, as it works with just Tidal, Artist, nugs.net, and 360 by Deezer.

When watching movies and TV shows, the audio quality mirrors that of music, but Sony also includes a feature to compensate for a persistent issue with Bluetooth devices: audio delay caused by a wireless connection. And for the most part, the XM4 corrects for this problem well. It’s only a touch off in scenarios where perfect sync is needed—like dance videos, where movement is extremely tied to exact beats (or even fractions of beats). Surprisingly, in such instances the music is actually too early by a quarter beat or so.

In calls, incoming audio sounds clear on WF-1000XM4, as does the microphone to other participants. However, transmissions over the mic have a hollow quality, which makes these buds a bit weaker on this front relative to a couple of rivals in the same price range.

For all types of audio, you can crank the volume pretty well. Set at what I consider an average volume—enough to blot out normal conversation with noise-canceling mode on—was about 33 percent of the maximum. You can also let the app handle volume adjustments for you by enabling automatic volume adjustment based on level of background noise, as well as a “speak-to-chat” feature that pauses playback if you begin speaking for a certain amount of time. The latter function works particularly well, and I found it much more useful than the automatic pause feature that’s triggered when you remove a single earbud.

In theory, noise canceling on the WF-1000XM4 can be as heavy or light as you prefer. The companion app allows the adjustment of the ambient noise level on a scale of 1 to 20, with 20 being the full amount of ambient noise possible.

But in practice, when you crank the noise canceling all the way up, not all types of sounds get blocked. The WF-1000XM4 is good at blotting out conversations, including semi-loud TV shows in the background. But for street noise, you get only a muffling of whooshing cars and angry honking rather than cancellation. Traffic sounds dropped by about half at most, and they still bled into music or podcasts unless I pushed the volume higher than personally comfortable. Similarly, the WF-1000XM4 offers little defense against wind. Even with automatic wind noise-reduction switched on, fierce gusts were notable. For stronger noise-canceling performance, you’ll want to turn to rivals like the Bose QuietComfort Earbuds instead—but with the Bose in particular, it’s a trade off of more sterile-sounding audio.

Ambient mode has quirks as well. The headphones pipe in whatever the mics pick up for this mode, including the brush of fabric against them if you’re wearing a jacket or sweatshirt with a hood. I found the WF-1000XM4 useless in ambient mode whenever bundled up in a hoodie; and even when I wasn’t, I still found the artificial, digital quality of external sounds substandard for orienting myself on a city street. The mode will keep you from getting run over or feeling too disconnected from surroundings, but I often ended up taking one earbud out entirely instead.

The Sony WF-1000XM4 have solid battery life for true wireless ANC earbuds. Sony says you can get a max of 8 hours for music with noise canceling on and 12 hours if it’s switched off. For calls, you can do 5.5 hours with noise canceling on and 6 with it off. In general I found these estimates accurate, as the buds lasted between 6 and 8 hours with noise-canceling on during mixed usage, and trended more toward 8 hours in music-heavy sessions. The case provides two or more charges before you have to juice up the whole set via USB-C or wireless charging. Getting a full charge through a wired adapter takes about 3 hours.

To save on battery, you can turn off both noise canceling and ambient mode, which puts the headphones in a battery-suppressing state. Just keep in mind that the richness/fullness of the audio is affected when you switch off that active processing.

In use, I did notice a small difference in the discharge rate between the earbuds. The right earbud sometimes dropped as much as 10 percent lower than the left. I attribute this to tapping the bud often to change tracks in my playlist, a habit of mine that might not be typical of most people.

Pairing the WF-1000XM4 to devices is painless, even on a PC, which can sometimes be tricky.  (Tip: If you’re using these with Zoom or another video calling software, be sure to choose the headset version in audio options. Choosing the headphone version made Zoom go a little wonky.)

You can pair the Sony WF-1000XM4 to multiple devices simultaneously, but you can only be connected to one at a time, unlike rival buds. Switching is fairly easy. If you pair to a new device, the XM4 will automatically connect and switch. Otherwise, you can go to the active device’s Bluetooth settings and manually connect. Be aware that the WF-1000XM4 automatically connects to the previous device, but you get no audio cue to tell you which one it is.

The touch controls are a little sensitive for my taste. For example: Brushing against them lightly when pushing hair off my face toggled noise cancellation mode more times than I could keep track of. You can’t customize the touch inputs, either: You can only choose which of the three presets is active. By default, the left earbud handles noise canceling, while the right earbud handles audio controls. You can swap either of these for volume control. But for all options, you can’t change how many taps activate specific commands. Moreover, the buds don’t always register multiple taps well. I often would pause and restart media playback (single tap) instead of skipping to the next track (double tap).

What is customizable are the buds’ behavior when you take out one from your ears. By default, removing a single earbud pauses music or video playback, but you can turn off this feature in the app.

While you can still enjoy the WF-1000XM4 without installing its companion app on a smartphone or tablet, you’ll leave a lot of features and customization options on the table by skipping it. (For example, noise-cancellation level, Bluetooth connection quality, the default voice assistant, power saving, auto-pause behavior, etc.) Notifications are kept to a minimum, with indications about battery levels for each earbud and the case, along with reminders to charge as battery levels drop below 30 percent.

The Sony WF-1000XM4 improvements over the previous generation keep them a strong contender against popular rivals like the Bose QuietComfort Earbuds and Jabra 85t. With a slim, easily pocketable case, good battery life, and a pleasing default sound profile, most people looking for a portable set of true wireless earbuds with solid all-around performance won’t be disappointed.